At 2am on a soggy morning at Malin Head, the most northerly point on the Irish mainland, three mates began a grueling cycle south to raise money to help Leukemia sufferers. It was never going to be easy and sometimes cycling was the least of it, but it’s an experience none of them will forget. And I drove the van.

I’M pretty sure the acrid stench burning my nostrils is the clutch I’m ruining as I wrestle the gear stick into reverse once more, sweat pouring down my face, deafened by the hideous grinding noise I’m making somewhere in the smoking guts of this 20-foot tank of tangled bike parts, sweaty scrunched up balls of Lycra and sloshing blue toilet chemicals.

Which is not, I might just say right now, quite the picture I had in mind when I signed up for this.

I have temporarily mislaid my glasses and somewhere behind me a jar of peanut butter has taken a dive and exploded like a grenade filled with baby shit and broken glass.

In the cramped bunk above the driving cab, Ollie is out cold after a 2am start to a bike ride this morning into lashing rain and headwinds so strong at one point he said he felt like he was cycling backwards.

Now a granite wall is shuddering closer to the windshield every time I fail to engage the clunky gears in ‘reverse’ and I’m blocking two full lanes of cars, tractors, vans, all of which are quickly losing patience, when Ollie appears over my shoulder, all bed head and bleary eyes, reaches forward, grabs the gear stick and manages what I hitherto haven’t, just inches before the camper van’s headlights becomes a permanent wall fixture.

Clearly, there’s a trick to it. I vow never to find myself in a position where I ever have to put this wretched beast into reverse again.

Aside from that, it’s all been fine – if driving what feels like a train carriage along roads the size of a garden path is your bag.

WE arrived into the car park at Malin Head before sundown in perfect stillness, the clouds and endless sea from the very top of Ireland seeming to disappear forever – an awe-inspiring view.

Rob rustled up fried potatoes and fatty ham on the camper van’s dollhouse size cooker and we shoveled away heaps of the stuff before bed. Then he pulled up a map. Ollie held up his hands in front of his face. “I don’t want to know,” he said.

We decided to measure the cycles in hours. Manageable chunks, that would be the trick. Three cyclists, only two on the road at any time, the other resting. No more than two hours at a time. Rotate.

How do you eat an elephant? The answer is, one bite at a time. We have three of the best racing bikes available. The pedals alone on Rob’s cost more than five hundred euro. Each. I could lift each bike with one finger and if you held it up and spun one of the wheels you’d be waiting all day for it to stop.

Ollie, Rob and Andy have also been training for this since January, sometimes in the dark, often in terrible weather.

“And because we’re starting at the very top of Ireland,” says Rob dryly, “it’s actually downhill the whole way.” 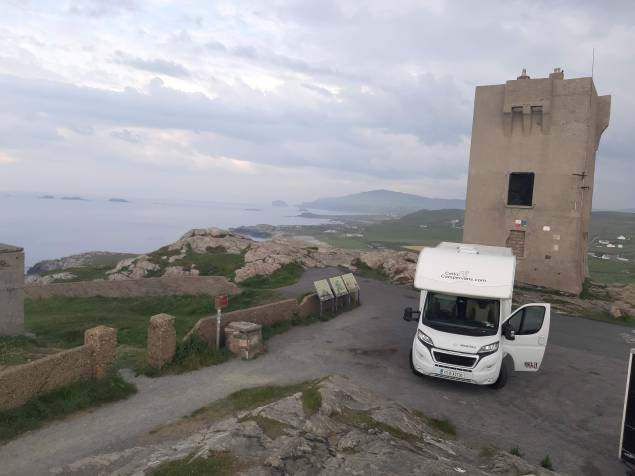 The glamour of it all: Granola on the dashboard, amid the scent of sloshing blue toilet chemicals 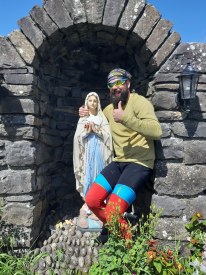 EVERYONE has their strength, their purpose, their responsibility on a trip like this.
Andy is the instigator, reminding us why we’re all here, with constant updates on where the fundraising total is. It was Andy’s mate Vinnie, young, fit, who was diagnosed with leukemia and survived where many on his ward didn’t.

Ollie, meanwhile, is a force of nature, a spring-coiled comedian. All he ever wants is to get on his bike and get on with it. He hates the waiting around, all the laborious preparations, but he’s often funniest when he’s most uncomfortable. We probably all are. It’s how we cope.

Rob is here to make sure everything is prepared just right before any bike wheels hit the road and that nobody hurts themselves, muscle strain or injury. He’s part nutritionist, part mechanic, part physio, the Rainman of route planning, and probably a serial killer.
He’s also the only person I have ever known to volunteer to empty the sewage tank, stripping to the waist, roaring and beating his chest as he works up to wrestling that little tank of horrors from under the camper and stomping off to get rid of it.

Once – I’m not sure where – a message pinged in to my phone from my wife: ‘How are you doing?’ I texted back: ‘Eating a cold, congealed breakfast roll while Rob empties the crapper. Can actually taste the blue toilet chemical in the back of my throat. This is how hardcore we are.’

I don’t think I heard back from her again. 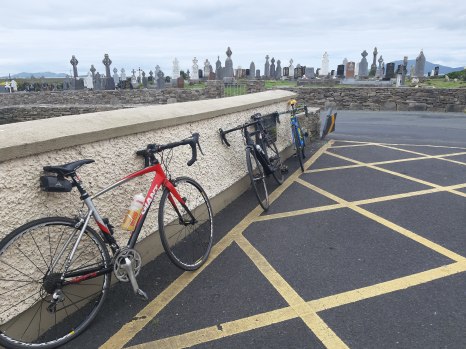 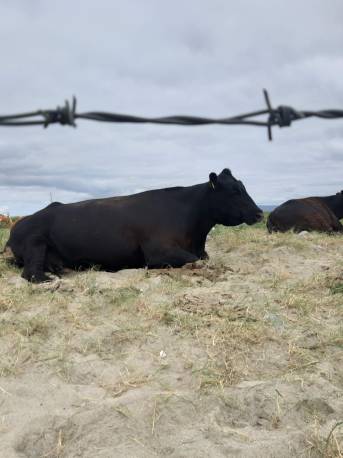 THE first leg was a nightmare. Ollie and Rob took off in the semi-dark around 2.30am. The idea was to get two or three cycles in each day, one before breakfast, one before lunch, one before dinner. With three cyclists rotating time on the road on some of the best bikes available, we should make really good time.

About an hour later I heard the first patter of rain on the camper rising to a steady drum solo. Andy and I packed up as well as we could and took off, but we never did overtake the riders, a little disconcerting when you’re supposed to be taking the same route.

At the agreed meeting point, the pair eventually rolled in, ashen faced, drenched, having rerouted.

“I swear the wind was actually blowing me backwards up a hill,” panted Ollie. 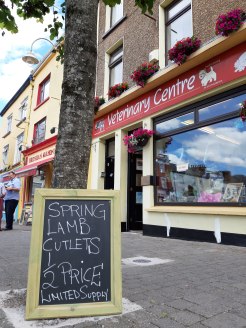 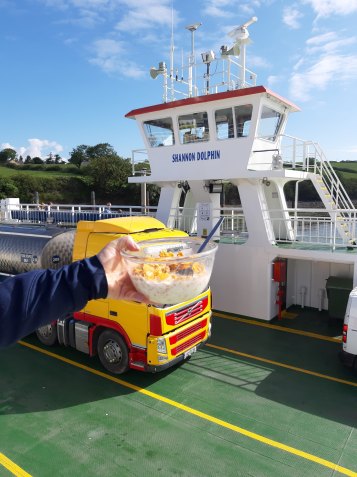 ROB was already improvising, rerouting as best he could to make the best progress with the least effort. This would become the mantra.

Planned pit stops, changeovers, even the final destination each day, were aspirational, figurative at best. I lost count of how many times in the first couple days when I laboriously maneuvered that giant gasping whale on wheels into the perfect spot in the town and began preparing for whichever pair were on their way in, only to get the call that they were stopped miles away on the outskirts of some unpronounceable village in the middle of who knew where.

“You can’t miss us,” Rob would say. “As you drive past the graveyard we’ll be the only ones dressed in florescent Lycra waving our arms and screaming.”

I actually thought he was joking. 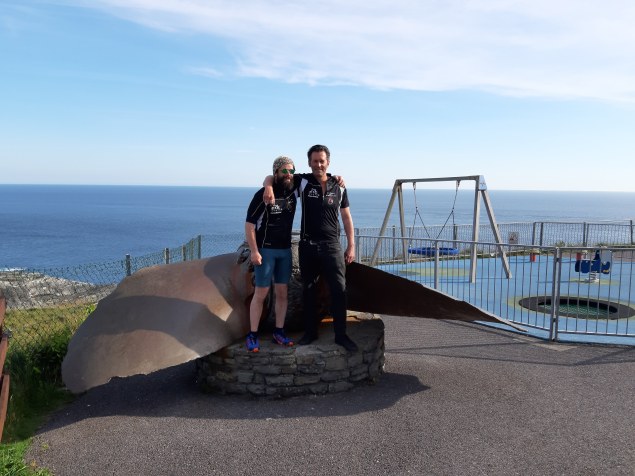 ‘…Once I forgot where I was, became tangled in bicycle chains and bits on the way to the loo, and woke everyone up shrieking like a girl…’

IF THERE was a choice at all, we’d drive on, to the nearest decent town so the lads could clean up and go in search of a real toilet. As the one who spent the most time with the camper, I very much encouraged this practice.

If we could eat out, we would. This, for me, was the best partp. Good food, good company, war stories of the day, proper slagging.

I don’t recall  laying awake in my bunk once, just hitting it then waking up next day, though once I forgot where I was, became tangled in bicycle chains and bits on the way to the loo, and woke everyone up shrieking like a girl.

It became routine, to rumble off to some quiet place outside of whatever town we’d eaten in, some likely spot from which to resume the route next day, a church car park in the middle of nowhere, beneath a ‘no parking’ sign, or in the entrance to a field full of cows (neither of which we noticed until daylight).

I wish I’d had time to properly look around Sligo, or Westport, Doolin, Ennis, Listowel or Killarney – places I’ve rarely if ever been. Invariably, we had to bypass them or reroute, or I’d be playing hide and seek again with a pair of comedians in bright Lycra who were marooned off in the wrong direction.

What I mostly saw was the inside of a rapidly deteriorating camper van, or just endless, albeit beautiful, fields at some roadside pit stop, or else I was just too focused on not taking off the wing mirrors of every car down one side of a street that was never designed to facilitate a vehicle the size of an industrial barge.

And, believe it or not, I miss all of it now, more than I might care to admit. 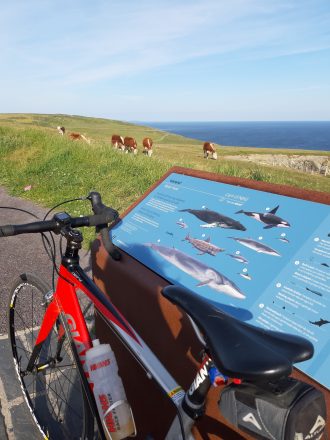 THE last route to Mizen Head was the hardest on which to drive. Some bits were only as wide as the camper and fell away on one side into the sea, but being the final leg, it was the most exciting.

We waited what seemed like forever for Ollie and Andy to come in. It was a two-hour cycle but they decided to detour, this time for pleasure. After the nightmare of the first day and a half, the other three and a half days had been sunny, blue skies, no wind, perfect cycling conditions.

We cheered as they came in, but I’ll be honest, none of us had much left in us, even though we felt good, so we just stared off into the seemingly endless sea in silence for a while, rather like we’d done when we first started, five days before.

“Next, the Pyrenees, September,” piped up Rob.