THEY say you can tell a lot about a person by the company he keeps. I don’t know about that. The friends that I truly love, impervious to time apart, are drinkers, dreamers, heretics and hedonists; fearless, curious and romantic and, most of all, alchemists able to somehow beat the clay of life into something strange and wonderful.

These are qualities I envy and which come close to describing one of the most extraordinary men I have  met, while on holiday some years ago in The Burren. A genuinely magical being with a tongue of tarnished silver, had I been told Peter actually harked from some otherworldly realm, I probably wouldn’t have blinked.

We could have dived down the rabbit holes of any hostelry that night, but I chose a place that could as easily been a hobbit pub from The Lord of the Rings. As soon as we unlatched the heavy door and pushed it open into the soft, dark warmth of the place, as though waiting for our cue, a man at a table to our right tossed a spoon noisily into a huge bowl and pushed it away from him. “Isn’t that the best soup a man has ever had?” he bellowed, then beamed.

Platinum-haired Peter was built like a Viking but had the glint in his eyes of someone with a secret and that you might just be the one he’d been waiting for all this time to tell it to.

He marched behind the bar, pulled a pint and planted it in front of me. I hadn’t asked for anything yet, I told him. “This one’s on the house,” he said.

He told us he was the direct descendant of a famous highway robber. “Come with me,” he said, eyes gleaming. I looked at my wife. She shrugged.

He led me through passages to a room that reeked deliciously of hops and I watched, fascinated, as he clambered around towering vats to check various dials and hatches like a mad professor. He opened one and beckoned me over, a finger to his lips. “Ssh!” he said, showing me the pond of fizzing spittle inside. “It’s alive,” he whispered, gazing at it lovingly. 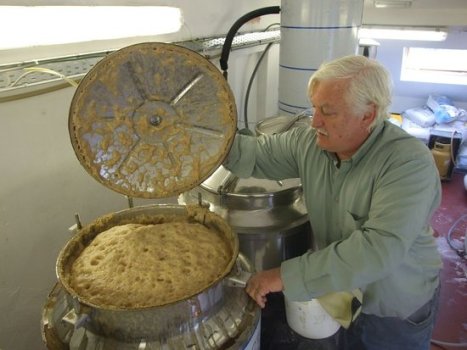 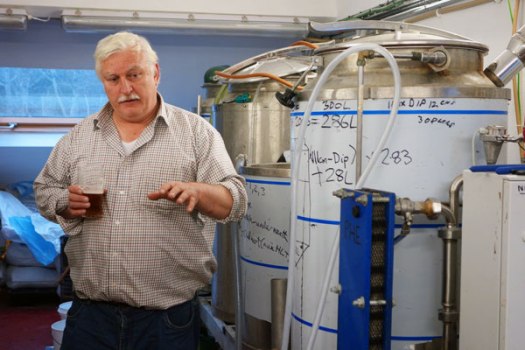 I felt gutted to have to leave, knowing we were away back to Dublin the very next day. On the drive home, I jabbered on and on about Peter. “He talks to his yeast,” I told my wife. “I know,” she said. “You told me.”

It was more than a year before I returned. “You took your time,” is all Peter said, topping off a pint to set in front of me and giving me the uncanny feeling, just like last time, that he’d somehow known I was about to walk in.

This time I had my younger brother from America in tow, a Death Metal head complete with goatee and blood-spatter T-shirt.

“We’re on a camping trip,” I explained.

He ferried pints to us all night. “Samples,” he said. We fled them and they found us, until blurry-eyed, we begged for our beds and were brought upstairs to store rooms where something resembling mattresses remained among the detritus of creative decades.

“This one,” he bellowed to my brother, “is the very bed where my great aunt died from TB.”

“And this one,” he whispered hoarsely at the next door, “is the very bed in which I arrived from between my mother’s legs, screaming into the world.”

“Sleep tight,” he added and vanished.

The next day we were rallied at what seemed like dawn. I’m not sure if Peter had slept at all. We crawled down to the closed pub where he stomped across the floorboards.

“The morning is a-wasting, lads!” he boomed.

Next thing we knew, we were hurtling over The Burren, stopping twice only so that my brother could lean over a fence and talk to God. The third time, the vehicle was abandoned.

“This way,” cried Peter, windmilling one arm and taking off over the rocks.

“But the path,” I choked, pointing weakly in the other direction.

“Fuck the path,” thundered Peter, marching ahead. “Follow the smell of goat shit!”

I looked at my brother, whose stomach hitched and he clutched his face, doubling over as Peter disappeared into the distance, bellowing some song or poem.

Hours later, we limped, empty, back to the car, and launched back to where breakfast was a great shank of lamb accompanied by two full pints apiece. My brother looked at his, stroked his Death Metal beard and began to cry softly.

“Now I feel we’ve gotten to know each other,” grunted Peter, wiping his mouth with one great sleeve, “I’ve something to show you.” He whisked out a newly printed poster that depicted the sepia images of Native Americans in their feathered heyday and, dead centre, Peter, head shaved, in the garb of a tribal chieftain and clutching a spear.

Somewhere about a hundred miles or so into our journey home, my brother summoned the strength to ask. “Did he… really happen?”

I knew what he meant. It felt like we’d just been up the beanstalk.

Years evaporated and I yearned to return, but never quite managed it. Then a photo pinged in to my phone. It took me a moment to recognize the view from above a fermenting vat, fizzing foam inside.

“Come right away,” read the message. “I’ve harvested wild yeast from the mythical fort of the Tuath Dé Danann… and made FAIRY BEER.”

I began clearing my diary without so much as a second thought.