Skip to content
I’M guessing that, like me, a lot of people have a ‘happy place’ they sometimes visit in their heads, and that when the shutters come down, on some horrible train commute say, surrounded by people who, like us, hate counting down the precious, increasingly finite days of their existence feeling like an extra in someone else’s movie, that it’s some deeply cherished memory they like to revisit. . .
Those with religion console themselves with prayer. Smart people might do puzzles in their heads. Some meditate, slipping into the saline embrace of their minds’ ocean. Others just hum a tune. Me, I go to Captain Lou’s.
I discovered Captain Lou’s on a trip to the States to see my Mom in the small, lakeside town where she lived. South Haven is ‘Hometown USA’, all barbecues, deck chairs and lawn sprinklers. American flags adorn the front of wooden houses and summer nights light up with fireflies. It truly is the land of blueberry pie and high school homecoming queens, and some people never leave there in their lives.
Whenever I was there I’d try to find the time to poke around the quiet little stores on the short main street, one place sold giant cookies; another had wind chimes and hanging spinners; there was a shop full of scented soaps and candles; a diner, a doughnut shop, the old movie theatre and a Dairy Queen.
Ducking from awning to awning to avoid the heat of the early afternoon sun, it’s about as far from a busy, damp Dublin day as you could imagine and, from here, Captain Lou’s is only a few minutes away, once you know the way.
You cross the street between huge pick-up trucks parked nose to curb, and head down a side street, nodding to an old man in shorts, sneakers and a Cubs baseball hat balanced precariously on his head. You pass the faded glory of the movie theater, with its ’50’s-deco facade, then find the river at the end of the street and follow it up to the blue bridge.
As you get nearer, you see flashing red lights signal traffic to stop while the bridge yawns open to let a puttering sail boat through. Seagulls wheel and cry. A couple Harley’s idle then rev as the bridge closes over. You hope they’re not stopping at Captain Lou’s, a favourite biker haunt, but they roar off toward South Beach.
Crossing the bridge on the narrow cement walkway, a passing car makes the warm, hollow thrum of rubber on steel grill as you note the familiar pink neon cursive sign on the shack tucked away below the far side of the bridge. It’s open and it look like you have the whole place to yourself, deck and all. You smack your lips. You’re thirsty now and could really kill a bottle of beer.
You take the steps down to the bar two at a time, stopping only to breathe in and savour the warm sunshine and river smell through your nose before pushing open the door.

The walls inside are not cluttered, just a few mirrors with beer logos: Michelob, Bud Light – no-nonsense working men’s beer. The ceiling flutters with banknotes, a lot of them dollar bills with messages scrawled on them. There’s a sign on the bar advertising Fireball shots, and a pleasant smell lingers as though something has been freshly fried. A baseball game crackles on a tiny radio.

The barman pokes his head in from the deck, chewing. He licks his fingers and smiles, wiping his hands vigorously on a bar towel. He’s wearing shorts and a bright summer T-shirt that says ‘Bahama Mama’.

“Hey there,” he says. “Canna getcha.”
“Red Stripe,” you say without hesitation. He nods, still smiling and fishes a fat, brown bottle from a trough of half-melted ice. He puts the bottle on the counter, digging in his short apron for the opener as you watch one of the drops of condensation on the neck of the bottle burst into a rivulet and run down the label. He pops the cap with a flourish, lifts the bottle and puts it down a little closer to you.
You take a long swig from the bottle, ignoring the slight brain freeze and the ache in your throat from the fizz, only stopping to take a breath and belch into your fist, raising an eyebrow in mild apology and wiping your mouth on the short sleeve of your shirt.
“Getcha sumpin’ a eat?” says the barman. “Got fresh perch, fished a s’mornin’.”
You consider this. “Mmm, thought I might just have a burger,” you tell him.
“Everything on?” he says, finding a patty and turning on his heels to slap it sizzling onto the nearby griddle.
“Everything,” you grin.
“One Lou, comin’ up,” he says. “Now, how ’bout another Stripe?”
You fill your lungs with the delicious mist of frying beef and look from your bar stool to where the sun dapples on the surface of the river just a couple yards away and it’s then that you catch yourself… happy.
Captain Lou, see, is a state of mind. That power-pop song on a bright Sunday morning as you crack a couple eggs into a pan, that’s Captain Lou too, as is that moment when the evening holds its breath between sundown and dark and birdsong carries for miles, or the feel of the fur of your dog on your feet beneath the table when you sit down to a perfect meal – that’s so Captain Lou.
I don’t know if I’ll ever be back to the ‘real’ Captain Lou’s again. I don’t know if I want to – or even need to. All I need is to be able to summon up the picture of that barman scooping up a second beer and stacking cheese and grilled onions on top of a sizzling disc of meat nearby.
Or to just catch myself feeling the same way every now and then. 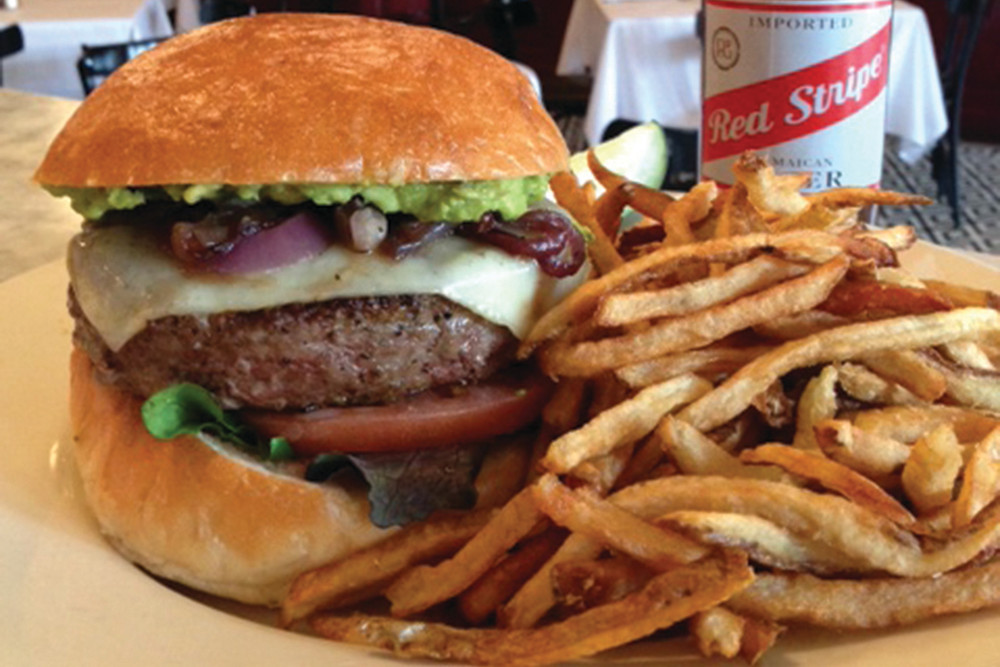